The consultative committee is where users of the downs get a chance to air their views, rather than watching from the sidelines at conservators’ meetings while the local authority members remain silent. There was a poor turn out from the ‘establishment’, with only the chairman present from the conservators, no racecourse or trainer representation, and no downskeeper. And we still managed to keep busy for 90 minutes!

Leaflets for downs users: We’ve been shown a draft leaflet for hack riders, but it’s needed much further work. We obtained a commitment that we’d be shown a further draft before it’s published.

Maintenance of the sand track: This is the sand track, for the use of hack riders (after noon each day) at the foot of Six Mile Hill. We’re getting close to having a commitment to weekly maintenance included in the downskeepers’ operating programme, but it’s suprising how long it can take to give effect to something so simple: we’ve been pressing for something similar for years.

Overgrown hack rides: There’s a commitment to review the several hack rides which have become overgrown with scrub in the last ten or fifteen years. These include across the Warren Woods (see the photo) 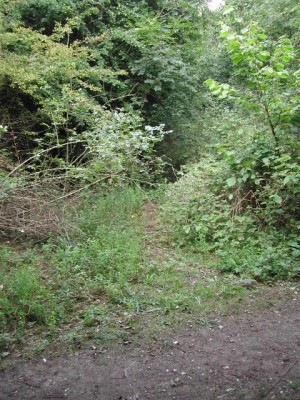 , on Juniper Hill, the afternoon hack ride between Walton Road and the London Road crossing (on the south side of the fibresand track), on the south side of the golf course near top of Rifle Butts Alley, and on the south side of Downs House inclosure. The habitat management plan action plan, currently under draft, will put forward a programme for dealing with these, although results won’t be instantaneous (it’s pretty obvious that some of these paths disappeared without complaint over a decade ago). We’ve been assurerd we’ll be able to review a draft of the action plan before it’s adopted.

Representation of hack rides on OS maps: We’ve now got final approval for the conservators to get the Ordnance Survey to mark the hack rides as ‘permitted bridleways’ on the next edition of the OS Explorer Map. Certain hack rides will be omitted, principally those only available after noon each day, while hack areas will be marked only where there is a defined route from A to B. But it should be much more obvious to riders, armed with a map, from outside the locality, where they can legitimately ride.

Marking of hack areas and hack rides: Officers have agreed to meet us to discuss waymarks on the downs, particularly where we think new ones are needed (some rides aren’t marked at all). In the meantime, the arrows on the existing waymarks are being repainted. And all the public bridleways should be signposted if the present programme of diversions is completed.

Golf course: We’ve flagged up a few minor concerns about hack rides on the golf course. It’s not always clear who is responsible for cutting back vegetation and scrub, so sometimes it doesn’t get done. Along Grand Stand Road, the hack ride lies across one of the raised tees, which can discourage equestrian use (particularly if golfers assume riders shouldn’t be there). And some of the new ‘golfer’s’ paths on the downs, although not constructed for equestrian use, can hardly be avoided because there’s no other way to go (which gets the golf club upset). It looks like these concerns will be taken on board as part of discussions between the conservators and the golf club about maintenance of the tenanted areas.