The consultative committee tour took place this evening, in what ought to have been estival evening sunshine, but started out dull and windy, and became wet and horrible. People took some coaxing to dismount from the Epsom old peoples’ day out minibus which had been provided for our use.

We had a look at the Langley Vale Road horse margin (strictly, nothing to do with the conservators), and agreed that it’s pretty grotty for use by horses in training, but since nobody had any power to do anything about it (it’s a Surrey County Council responsibility), it’s unlikely to change anytime soon.

The hatched area (below) 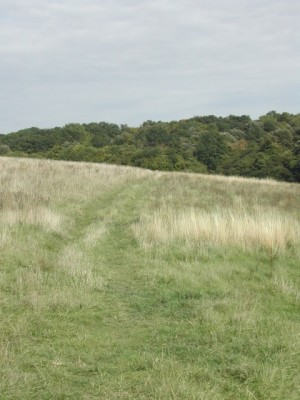 at the foot of Six Mile Hill was inspected, a now frequent ritual, where we say we’d like to ride there (as envisaged under the 1984 Act), and the Training Grounds Management Board say ‘no’. We’ve been invited to present a case before the TGMB later this year, when we’ll put forward a plan which may or may not meet with approbation.

Everyone agreed that the diversion of bridleway 65 across the south-east corner of Six Mile Hill would be a ‘good thing’, if only Surrey County Council could get on and do it, but apparently it’s being held up by negotiation about whether the order should be a diversion or an extinguishment and concurrent creation. Meanwhile, time passes… .

Then we moved on to look at the Langley Vale Woods hack ride, or rather, we would have looked at it if it hadn’t become obscured by overgrowth about 15 years ago, and unusable. Agreed that the woods were in an awful state, and needed better management all round.

Finally, to the Downs House hack ride (the one on the south side of the Downs House enclosure), which is supposed to extend about six metres across the grass on the downhill side of the hard track, but the marker post is nearer about two metres. Nick, the conservation adviser to the conservators, had a root around in the scrub between the track and the Downs House fence, and reckoned the track itself had been rebuilt further out, neatly snaffling about four metres of hack riders’ grass and leaving the original track languishing in the undergrowth.