Remarkably, Surrey County Council has at last attended to the slough of mud which had built up at the bottom of Ebbisham Lane (see photo below), just short of the entrance on to the Downs. Ebbisham Lane used to be part of a through route between Epsom and Walton-on-the-Hill, and until the 1970s, one could drive along Walton Road over the downs and up Ebbisham Lane. Now, the lower part of Ebbisham Lane is only of practical use to horse riders, cyclists and walkers, for the car park at the bottom is neglected (it lies in the borough of Reigate and Banstead, but oddly, Epsom and Ewell borough council has a duty to maintain it). Unfortunately, reaching the downs this way meant negotiating a deep pool of mud which had built up at the lowest point of the road â€” unpleasant on horseback, and pretty revolting on a cycle. The council has scraped the carriageway, and dumped the excavations on the shoulders of the road. Some efforts have been made to improve drainage too. How long it will last is anyone’s guess. 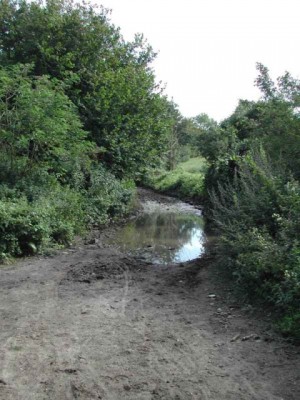